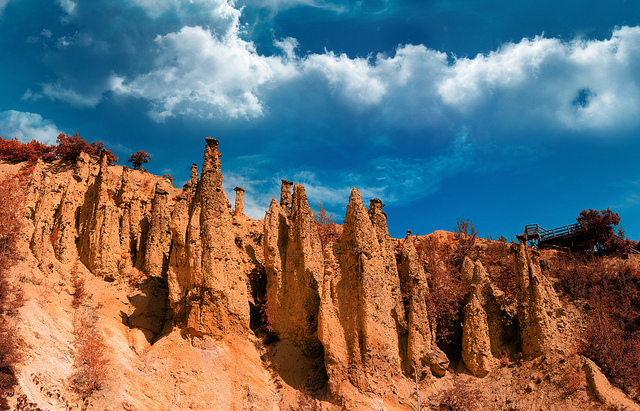 The dark ages left a great number of sinister names of bridges, towns, and strange natural phenomena, like the petrified wedding party in Kuklica, remnants of churches devastated by devils, Devil’s bridges all over Europe or the Devil’s Town (Đavolja Varoš) in Serbia.

Devil’s Town in Serbia is a natural monument in the south of the country on the slopes of Radan Mountain, which is famous for its mineral and thermal springs. There are approximately 202 high eroded rock formations with what looks like caps on their tops - those are known as andesine plates. Those plates are rocks created during a volcano eruption millions of years ago. The diameter of each rock pillar is about 1 meter, and the shapes of pillars are quite odd. The natural springs flowing nearby are also called the Devil’s Water and the Red Well have high iron concentration, which makes the water blood-red, adding to the eerie atmosphere of the place.  The whole area has almost no vegetation.

In addition to the crimson river effect, the winds that blow in Devil’s Town (Đavolja Varoš) produce bizarre sounds which can be easily taken for sighs, murmur or squeaking. No wonder this place was scaring the bejesus out of the medieval folk. If you visit this place in winter or autumn, there is a bigger opportunity to listen to the sounds which used to frighten the locals centuries ago.

Obviously, this place has a plethora of legends about it. One of them tells that once upon a time the place was inhabited by peaceful, kind and religious people. The Devil was bored with their peaceful uneventful life, and decided to make it more interesting - he poisoned the water in the spring, making it evil. When people drank the water, they forgot who their relatives were, and engaged in incestuous behavior
- brothers married sisters and sisters married brothers. One good fairy decided to stop this madness and asked God for help. And God helped
– he turned all those who did the dirty deeds into stone.  Other legends tell about petrified demons, petrified rebels, that the rocks are actually the remnants of a church, devastated by Satan, and so on. Local residents believed that these rock formations could actually move and cause harm.

Nowadays you can do a day or night tour of Devil’s Town(Đavolja Varoš), Serbia. Night tours are, evidently, more popular.

Sandboarding down the Cerro Negro volcano