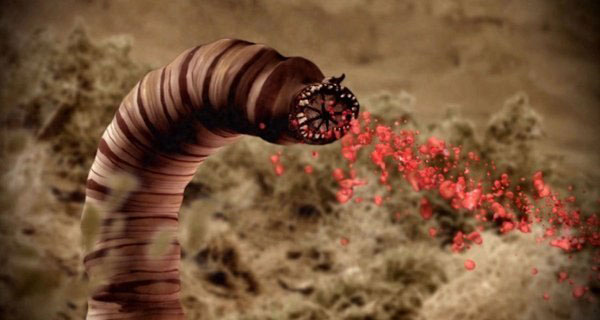 If you are in Mongolia exploring the majestic Gobi Desert, why not look for Olgoi-Khorkhoi along the way?

Olgoi-Khorkhoi's habitat is the sands of the Gobi Desert, in the southern Mongolia. This blood red creature comes out  from the sands only occasionally, but if you see it, you should run for your life.  No wonder the creature's name is also Mongolian Deathworm. It spits yellow, acrid saliva on their victims, and if you find yourself close enough to it – most likely you will die, because the venom of Olgoi is strong enough to kill a camel.

Many generations of local people believed that the Deathworm is real, and they named him Olgoi-Khorkhoi which literally means “worm-intestine”, and not because it lives in the intestines – because it looks like  cow bowels. Those who claim to have seen it say that it is dark red, 0.5 - 1.5 meters long.

This Deathworm sounds like science fiction, and of course, the official science says that this creature is  just a monster from the colorful local legends.  There is no pictures or any material evidence, except for the stories of the eyewitnesses.  However, since we, humans, are curious beings, we know that sometimes   even the insignificant rumors can turn out to be true.

Some of cryptozoologists  found the eyewitness' testimony compelling - so compelling, that in late April of 2005, they decided to send an expedition to the Gobi Desert, to see if they will be able to find any conclusive evidence of the existence of this elusive worm. The members of the expedition were a physicist, a writer, a designer and an artist. They kept the world updated during their research via their blog. After four weeks of staying in the desert, the group said that they were convinced that the worm could really exist, because  every story they heard described the same thing: a reddish-brown worm-like creature, about two meters in length and five centimeters thick, without any bulges in the head or the tail. They interviewed dozens of witnesses, including one who claimed to be able to show the team where to find tracks and burrows of the worm. The plan was to dig up and remove it from the den, but they did not succeed. They saw hundreds of snakes and lizards, but not one Deathworm. That's when they started suspecting  that the culprit of Olgoi-Khorkhoi stories could be some undiscovered kind of lizard or snake, or that the Deathworm might live very deep in the desert along the prohibited areas of the Mongolian-Chinese border.

Read more about Mongolia off the beaten path

Find more off the beaten path near: Gurvansaikhan Ulaanbaatar 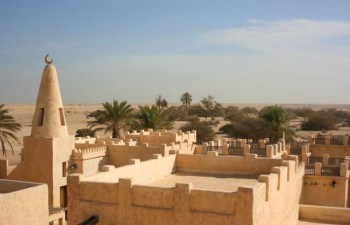