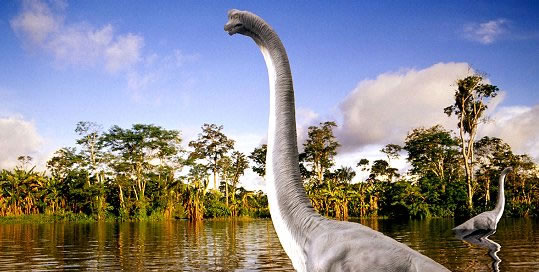 Lake Tele is located in Congo, Africa, in one of the most unexplored corners of our planet, and  it is a true gem of nature. The locals say that Lake Tele is the habitat of Mokele Mbembe, a terrifying but kind monster.

Lake Tele is located in a hard-to-reach, remote area, surrounded by the mountains and the jungle. This area is very hard to survey because of the dense tropical swampland.  Many surprises may await an unprepared traveler on the way to the lake, like wild beasts and poisonous insects. That is why not many can boast that they have seen the lake.

The first Europeans who found out about the terrifying beast living in the lake were French missionaries, who traveled the jungle in the 18th century. Besides converting the locals to Christianity, they also wrote reports on the everyday life of the people, about flora and fauna of the location. In 1776 , the French abbot Proyart used these reports in his “History of Loango”: the missionaries used to come across the clawed footprints of some huge unknown beast, which were about 3 feet in diameter and at a distance of 7 to 8 feet apart.

Mokele Mbembe legends are often accepted as a fact by the citizens of the country.  Even the local scientists admit that  it is possible for an ancient exotic form of life to survive in such an inaccessible area. According to the descriptions of the local hunters, the monster looks like something between a brontosaurus and a hippo. Native pygmies and explorers reported seeing the long-necked beast  poking his head out of the lake.   Congolese authorities are trying to protect this legend from the curious scientists – since, on one hand, the legend of Mokele Mbembe attracts tourists, and on the other hand, allows you to preserve the lake in an untouched state.

It is possible to look at the lake from a helicopter. There are also local companies, which offer walking, hiking and pirogue tours to explore the lake and wilderness around Lake Tele, including staying there overnight.

Read more about Republic Of The Congo off the beaten path