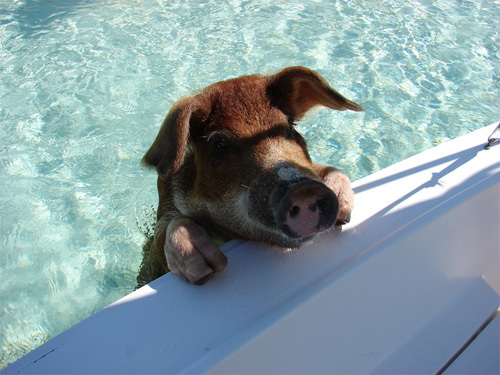 Yachtsmen traveling to the Bahamas are faced with an incredible swimming pigs phenomenon along the coast of the Big Major Cay island. This island is pigs' paradise, where they relax all day on the white sand under palm trees, and when they feel hungry they forage in a very original way. Upon seeing tourists, the pigs boldly throw themselves into the water and swim towards the boats, hoping to get some nom. Big Major Cay pigs are very pretty, with different colored coats, and, of course, super clean. Several generations of pigs grow up accustomed to the water since their childhood, eventually becoming great swimmers.  Even piglets can swim well enough – almost right after their birth they follow their mama into the water and swim naturally.

The pigs of the island gained such popularity that the island is often referred to as The Pig Island instead. The pigs were brought to the island by people – some believe that they survived a shipwreck, or that the sailors stored them there for future meals. Whatever it may have been,  now the entire island is under the pigs' rule. The pigs are super friendly and not shy at all – if you are on the boat, they will definitely swim to you, and if you are in the shallow area, they will just jump into your boat looking for lunch, happily oinking and grunting. No traveller can deny such charms, so the pigs are always well fed.

So, if you are snorkelling or scuba diving to explore the rich marine life of the Atlantic Ocean, do not be surprised if you accidentally bump noses with a swimming piglet.