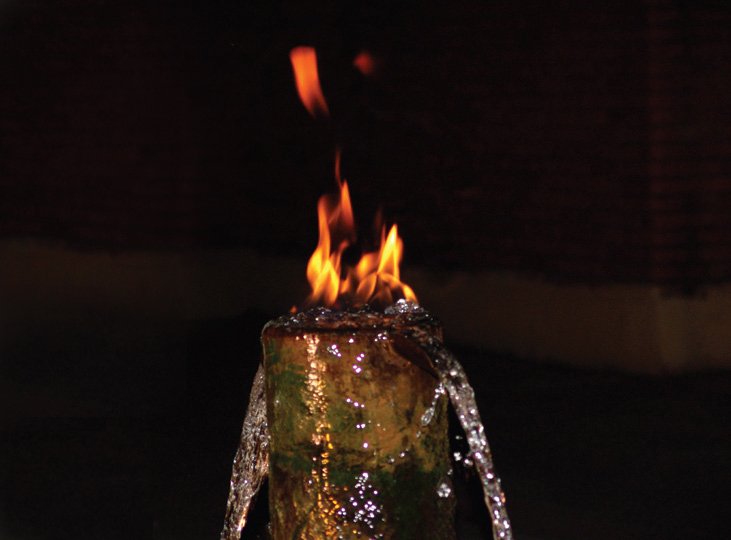 One of the most famous volcanoes in Azerbaijan is Yanar Dag, the Burning Mountain. It has been burning for such a long time that no one can remember when it started.

Located on the Absheron Peninsula, 25 km north-east of the capital city of Baku, Yanar Dag mountain is a 116-meter-high hill, with a natural gas pocket on top, that constantly bursts into flame. These jets of flame, coming out of the porous sandstone layer, can reach up to 3 meters in height, Unlike other mud volcanoes in Azerbaijan, Yanar Dag has no mud, so the fire burns forever.

Along the edge of the hill there is a10-meter-tall wall of fire burns continuously, which looks especially spectacular at night. The air around this "fire" is always warm and smells of gas. Strong winds around Yanad Dag creates various shapes of the flames, which contributes to the magical atmosphere of the place. The flames rise everywhere – out of the ground and even out of the rivers located around the hill. The fiery streams coming out of the water are called Yanar Bulag, or "hot stream". The water  around Yanad Dag is saturated with sulfur and is quite flammable – all you need is a match and you can set the water on fire. Locals believe that fiery waters have healing properties, and they often bathe and wash their feet in Yanar Bulags. About 200 meters away the hill there is an inactive volcano, which ejects a mixture of mud, water and sulfur, and is also believed to have healing properties.

Yanar Dag burns regardless of weather conditions, and  locals believe that the mountain is sacred. It evokes the spirit of Zoroastrianism, where water and fire are the sacred means of purification, and is a place of pilgrimage for Azerbaijani fire worshippers and foreigners from India and Iran. Numerous links to fire in Azerbaijani folklore show its connection to the ancient Iranian Zoroastrianism, which appeared in the area over 2,000 years ago. According to rumors, a lot of sick people see this mountain in their dreams, and when they go to the mountain they get healed. However, rumor has it that if you show up drunk, your health will decline.

A scientific explanation for the Yanad Dag's eternal fire is that Azerbaijan is a country with huge oil and gas reserves, which leak through the ground and cause fires. Even Marco Polo wrote that he observed fiery flames bursting out from every corner of Absheron peninsula in the 13th century. Alexandre Dumas was also one of the witnesses of Yanar Dag's fire inside one of the Zoroastrian fire temples built around it, five centuries later.

To this day, the flame does not cease to amaze tourists, locals, pilgrims and scientists. Yanar Dag is a protected place with an ongoing archaeological research.