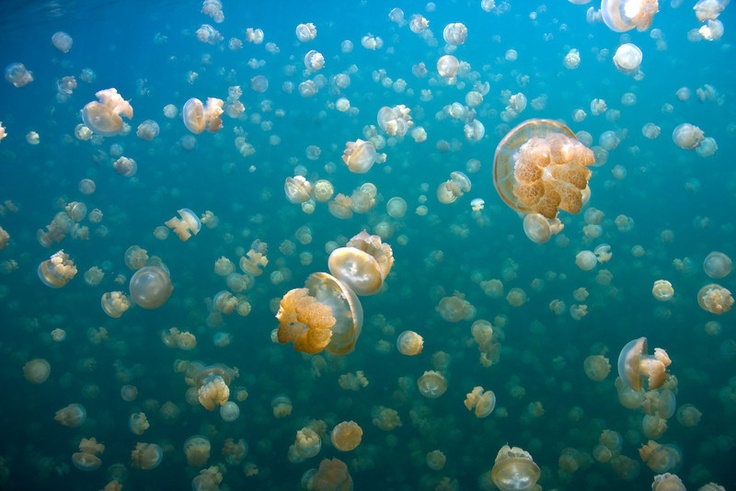 Jellyfish Lake - Ongeim'l Tketau -  is the only lake out of the 70 others in Palau, which is open for the divers, and is the largest one. The main inhabitants of the lake are, of course, the jellyfish.

As a result of the shift of the crust, the lake formed about 12 000 years ago. The cavity that was formed because of the tectonic activity got separated from the ocean, filled with water that leaked through the limestone layers and became a 460 meter long, 160 meter wide and 50 meter deep lake. The ancestors of the modern inhabitants of the lake made their way into the waters through the fissures in the  limestone as well.

Since then, the jellyfish started living a careless life in the lake and multiply in this completely safe and secure environment. Because of the fact that the  lake is completely cut off from the ocean and no jellyfish-eating predators can enter it, the stinging cells of the jellyfish became unnecessary and devolved. Therefore, one can safely dive and swim among the swarms of jellyfish without being afraid of getting stung.

Nowadays there are about 2 million jellyfish in the Jellyfish Lake. Given the size of the lake, this number seems incredible. There are two species of the jellyfish that populate the lake – golden jellyfish and moon jellyfish.

The Jellyfish lake is quite unique – the only connection it has with the Pacific ocean is through the fissures and tunnels of its limestone walls. The lake has two distinct layers in it – the top layer, full of oxygen and life, extends to the depth of 15 meters. Below it is the oxygen-free layer, the first 3 meters of which is populated with sunlight-absorbing bacteria, and the rest of the layer is dark and devoid of life. The lowest part of the second layer contains high concentration of ammonia, phosphates, and hydrogen sulfide, so it is dangerous for divers to dive that deep. Another unique feature is that the jellyfish populating the lake are very different from the same species living in the open sea water, because they evolved in an enclosed space.

The movements of jellyfish throughout the day is an impressive sight – twice a day, the golden swarm crosses the lake from one shore to another, following the sun, and at night they rush into the depths.

Gallery: The Jellyfish lake in Palau

Read more about Palau off the beaten path

Find more off the beaten path near: Koror