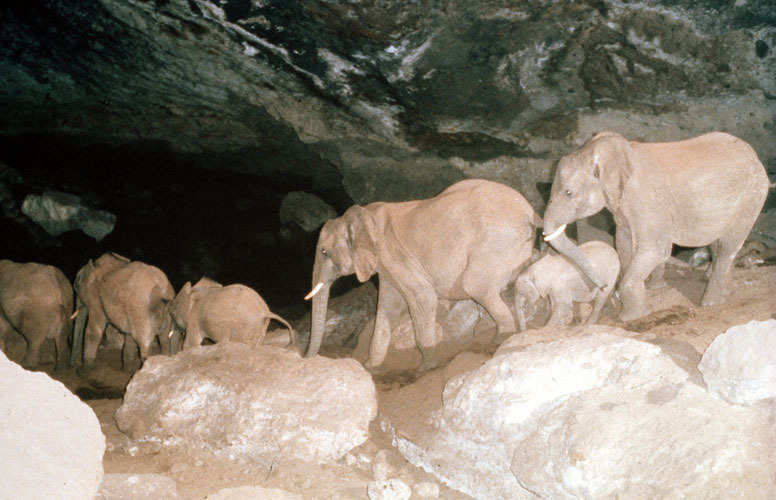 Kitum cave is located in the depths of a long inactive volcano of Mount Elgon on the border of Kenya and Uganda, and it has been a subject of debate and study for quite a while now. When the cave was discovered, the marks on its walls were thought to be the ancient Egyptians' attempts of searching for gold or diamonds. After the excavations it turned out that this was not the case.

The walls of the cave are covered with salty hydrochloric plaque, washed down from the sparse desert soil. The plaque is rich with life-essential minerals, and these minerals are the cause of many beasts' pilgrimage to the cave.

What happens in Kitum Cave is similar to the Water Truce from Rudyard Kipling's Mowgli -  after the drought, when the river got filled with water, the predators and herbivores gathered by the water, drank it and went home in peace, without harming each other. In our case, the animals come to the cave to eat some salt off its walls. First come the elephants – they use their tusks to break off pieces of the cave wall, which they can chew and swallow, leaving marks on the walls and making pathways further into the cave, then come the smaller animals, following the elephants' paths.

However, not all animals returned from the cave safe and sound. Elephants and buffaloes seemed to come out of the cave without any problems - the only possible obstacle for them is the narrow gap, which they easily overcome. Some of the smaller animals got mysteriously absorbed by the cave.

In 1980s, two people visited the cave and soon after they died in a terrible agony from a rare disease known as Marburg virus. Further detailed studies of the cave revealed no traces of the killer virus, but some experts suspect that the bats in the cave may carry the virus and their powdered guano was the cause of the disease. Some also think that this is the place from where AIDS or Ebola came into the world. It is assumed that such caves can be warehouses of dormant viruses, which are activated by the living beings entering the caves.

One of the theories about animal disappearances said  that some of the bacteria affected the body of an animal in a mummifying manner - the animal became a homogeneous petrified mass, which then disintegrated into dust.

Another wild hypothesis of the disappearance of the living creatures inside Kitum cave was the presence of a special energy field that completely incinerates any living being. This was explained as an effect of the electromagnetic waves at certain frequencies, which caused an explosive effect. This version is quite unlikely, since the cave affects only animals of certain sizes. While elephants and buffaloes remain intact,  the rest of the animals seem to carelessly bumble through the dark cave to meet their certain death for many thousands of years in a row.

Kitum cave and Marburg virus became famous when they got featured in a bestseller “The Hot Zone”. The most popular belief is that the Kitum bats can be held responsible for the mysterious disappearances of the animals and for spreading the virus.