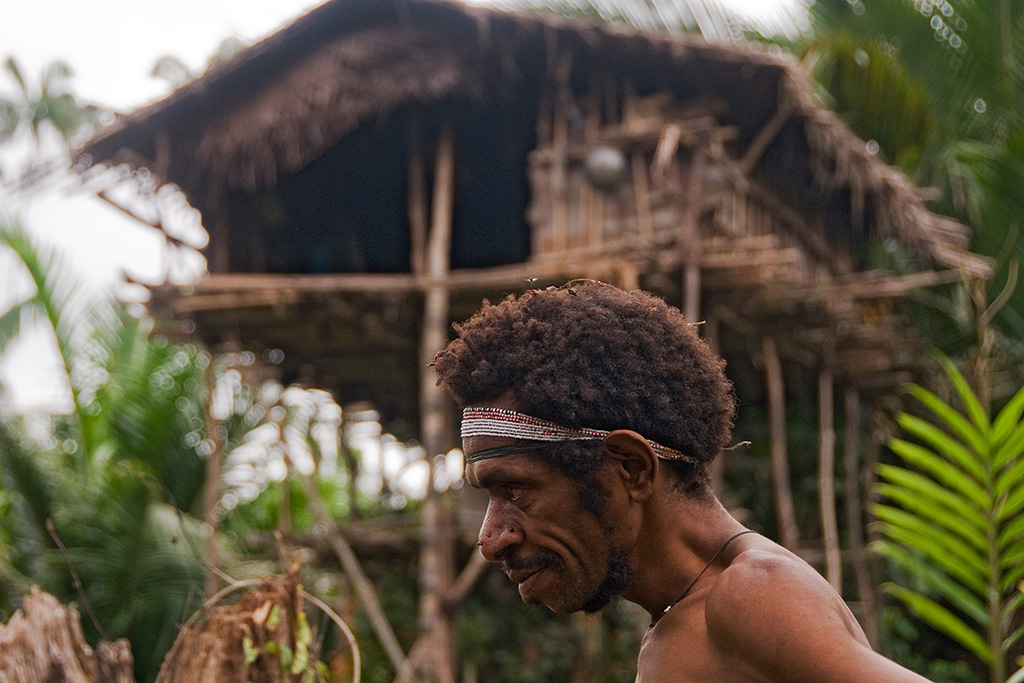 Several tribes previously not known to science were discovered in Papua New Guea only at the end of the last century.  One of them was the Korowai tribe, living in the vicinity of the Marauke city. Korowai live high up in tree houses, built out of tree bark and palm leaves at a height of 20-50 meters. They believe that such habitat is an excellent protection against mosquitoes and wild animals. Another reason for life in the trees is fear of sudden arrival of sorcerers. After hunting and working in the daytime, the whole family climbs the stairs made out of vines, carrying their supplies and animals up into their celestial homes.

The area inhabited by Korowai is practically inaccessible, situated between rugged mountains and two major rivers. Their population is about 1,000, and their way of life has not changed for centuries. Korowai do not use iron, have almost no household utensils, and use stone and bone tools for hunting and working.

The main source of food for the Korowai is sago tree. They consume its leaves, fruits and bark.  Flour is made using millstones, and added to dishes with larvae, roots and fruits, meat of wild goats, wild boars or  fish. Bug eggs, which are sometimes found in rotten leaves, are considered a special delicacy -  they are roasted and served as a main dish for a festive meal.

Although Korowai might seem very primitive, they do care about the future – they always plant new sago trees in place of the ones that were cut down. Sago tree is revered as a source of food, along with pigs. Korowai catch, tame and train wild pigs, using them both as food, watchdogs, and means of transportation. Pigs are considered so valuable in the tribe, that Korowai women breastfeed newly caught piglets. However, if a pig is caught stealing, it gets killed immediately.

The tribe has no chief and consists of several large families. The concept of family among Karawai is  primitive – all women belong to all men. During the flowering of sago tree, they have a consummation holiday, where women are chosen by men, and the ones left behind are being traded with other tribes or sacrificed and eaten during upcoming festivities. Clothing is not used by tribe members, women are limited to a loincloth and adorn themselves with fancy necklaces made out of shells, wild boar tusks and bat bones. Korowai men push their penises inside and wrap the rest with a leaf, or cover it using hard shell of forest fruit. Each man has a casual penis cover and a formal one. The formal one is usually decorated with fur and has a more elaborate shape.

Korowai life span is approximately 30 years. A loss of loved ones is a great sorrow for all the tribe – traditionally, women cut off parts of their fingers and men cut their ears for each deceased person of the tribe. Since Korowai men die more often, by the end of their lives, the women have almost no fingers left. The most distinguished members of the tribe get mummified, and the common tribesmen get wrapped in leaves and left to be devoured by wild animals.

There are many dangers that Korowai have to face on the daily basis – poisonous insects, wounds that take a long time to heal due to the climate in the area and hunting accidents. The main danger is newly introduced diseases from the missionaries, whose villages surround their territory, and tourists. Korowai die from common flu, rubella, measles and tuberculosis. On top of that, the rain-forest  continues to shrink in size due to the expanding roads and houses built by the Indonesian government. Korowai is one of the most endangered tribes, disappearing day by day.