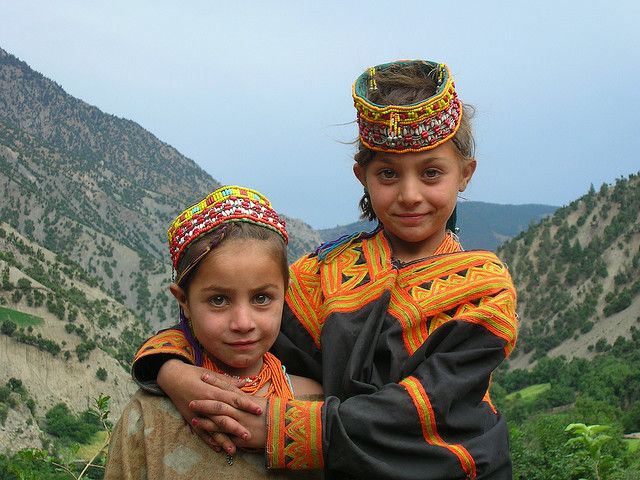 High in the mountains of Pakistan near the Afghan border, in the province of Nuristan, there are a few tiny plateaus – the Chitral District. It is home to unique and mysterious Kalash people. Their uniqueness lies in the fact that this Indo-European ethnic group managed to survive and preserve their pagan traditions in the heart of the Islamic world.  If Kalash were numerous people with a separate territory and statehood, their existence would hardly surprise anyone, but their population is no more than 6 thousand.

Kalash people lead a secluded life and speak their own language, Kalashamondr, which belongs to the  Dardic group of Indo-European languages. However, about half of the words in Kalashamondr have no analogies in other Dardic languages. In Pakistan, there is a belief that the Kalash are descendants of  Alexander the Great's soldiers, because a part of Kalash peoples' look very Nordic - there are many blond blue-eyed individuals.  Another part have typical for the region Asian appearance. However, genetic research proved the speculation of their Greek origin wrong, and the reason why some Kalash individuals have pale skin and blue/green/grey eyes is due to the preservation of the original Indo-European gene pool as a result of non-mixing with the migrant non-Aryan population. Similar anthropological characteristics are also found in Hunza people and ethnic groups from Pamir, Persia and others.

Kalash people practice polytheism. Their pantheon has a lot in common with the ancient Rigvedic Aryan gods and Zoroastrism. Fire is the main object of worship, along with wooden idols of deities cut by master craftsmen and standing in sanctuaries. Some of the main deities are Imra – the lord of the nether world and heaven, Munjem Malik – the lord of Middle Earth, Mahandeo – the god of crops and war, Dezalik – the goddess of childbirth responsible for the Bashaleni lodge, where women give birth. These deities have shrines and altars, where goats are sacrificed. Horses and crows are sacred to the Kalash  - Mahandeo shrines are usually decorated by carved horse heads and crows represent the ancestors. Crows are fed with the left hand only. Purity is a very important aspect of Kalash religion – women during menstruation, boys going through puberty, death, decomposition and the outside world are considered impure and  many cleansing ceremonies are required if impurity occurs. During the impure periods, boys are sent to herd goats, and women are sent to Bashaleni lodges.

At the same time, some of Kalash become Muslim. Conversion to Islam is not welcomed in Kalash society, since they  are trying to preserve their ethnic identity.  Because of their pagan practices, Kalash people were almost completely eradicated as a result of the Muslim genocide in the beginning of the 20th century. Since the 1st century, when Islam came to Asia, it was very hard for other religious communities to survive. The Kalash went through several genocides, until their tiny territory, called Kafiristan by the Muslims, went under the jurisdiction of the British empire.

The Kalash lead quite an ascetic life. They live in communes, since this way it is easier for them to survive. Their houses are built of stone, wood and clay, when one family's roof would serve as a terrace for the family living above. The household items are few – a table, chairs, benches and clay utensils. Electricity and television are only known by hearsay. All the vital resources come from agriculture – they grow wheat and other crops on land, cleared from rocks, and keep goats for milk and wool. The Kalash do not know weekends and work all the time, except for the major holidays – Joshi, the sowing holiday, Uchau – the harvest festival, Chaumos– the winter celebration of the gods of nature, where gods are asked for the smooth winter and nice spring, and goats are sacrificed, and Budulak – when prepubescent boys are sent up into the mountains to live with goats for the summer.  The family life is patriarchal, and marriages are arranged. Pregnant ladies give birth to their children in a special Bashaleni lodge, which is also the place where each woman spends time during her period.

Burial rite is one of the most important Kalash rituals, consisting of ritual dances to the beat of drums and reed horns, wailing women and men wearing goatskins over their clothes as a mourning symbol. The procession ends at the cemetery, where the dead are left in open wooden coffins in the open air.

Another feature of the Kalash life, which is different from the surrounding Pakistanis and Afghanis is that Kalash always made and used furniture, in particular tables and chairs, which are considered excesses by the local majority and appeared in Afghanistan and Pakistan only with the arrival of the British in the 18th and 19th centuries, but were not widely accepted.

Having survived for centuries, the Kalash population and culture is still on the verge of extinction – many are forced to assimilate by marrying Pakistani and Afghani people and converting to Islam, because it is easier for them to get a job and education. In recent times the Kalash were threatened with death by the Taliban, which caused outrage throughout Pakistan and increased security actions around Kalash villages.

Read more about Pakistan off the beaten path