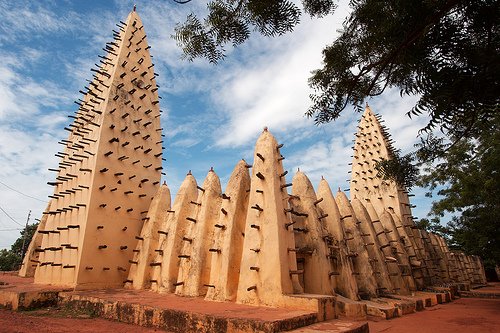 Bobo-Dioulasso in Burkina Faso is quite an ancient city, founded back in the 15th century.  Initially it was called Sya, but later the French colonists named it after the languages of the two major groups of the area's population -  Bobo and Jula. Literally the name means “home of the Bobo-Dioula”.  Bobo speaking locals still refer to it as Sya.

Back in the day, trade routes crossed this part of Africa, and the land around Bobo-Dioulasso was famous for its incredible fertility. Even in the ancient times Bobo knew the secrets of irrigation and crop turnover. Jula people always gravitated towards trade and crafts – men were weavers, blacksmiths and jewellers, and women were potters.

Bobo and Dioula, like other Africans, kept the spiritual and animistic beliefs of their ancestors. Over time, half of the Bobo peoples converted to Catholicism, and the other half to Islam. Most of Dioulas became Sunni Muslims, and created the city's landmark – the Great Mosque of Bobo-Dioulasso.

This mosque was founded in 1880 by the king of Sya. King of Sya was in a state of war with King of Kenedougou province, and promised to build a mosque in exchange for military assistance he got from the Islamic religious leader Sidiki Almamy Sanou.  The defeated King of Kenedougou was sentenced to work on the site as a builder.

The structure acquired pronounced features of local culture coupled with the classic type of Sudanese mosques. Built out of light clay in the form of elongated towers without minarets, the Great Mosque of Bobo-Dioulasso is studded with dark pieces of wood from top to bottom, reminding of some alien fruit or a weird animal. Those pieces of wood are there for a reason – they are convenient for climbing the walls of the mosque when in need of repair.

In addition to the exotic appearance on the outside, the Great Mosque of Bobo-Dioulasso is arranged in an interesting manner inside as well. Inside there are a lot of columns in the corridors and no individual rooms. The ceiling has holes to provide constant ventilation and you can actually see the mahogany tree logs covered with clay, dung and straw – the building blocks of the mosque. Men pray in the area of the columns, and women pray in the back.  As opposed to most Muslim houses of prayer, even non-Muslims can enter the mosque for a modest fee and meditate.

In 2000, during the Paris-Dakar Rally, many tourists went into the mosque without removing their muddy shoes, and tourists were banned from the mosque for several years. The Great Mosque reopened its doors recently, and you can visit it again. Before leaving the mosque, make sure to tip the boys who watch the visitors' shoes by the entrance. 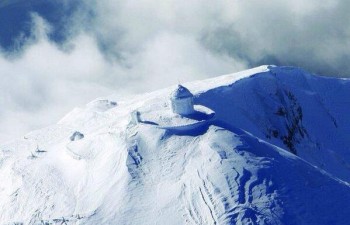