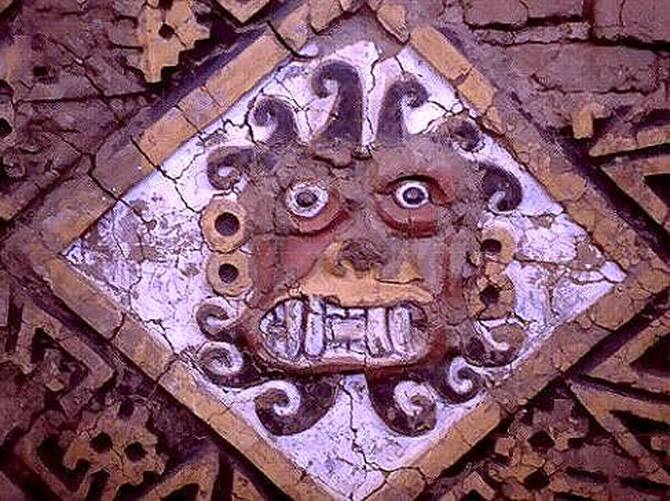 In the first century AD, Valle de Moche near the city of Trujillo, Peru, was the center of one of the most glorious civilizations across the globe - Mochica.

The Indians of this civilization lived in a relatively small area, about 300 kilometers in length. Mochica was the most prominent and most cultured civilization, on the South American continent. Moche valley has fertile land, irrigated by small rivers, which produced fine crops. The rivers were inhabited by many fish, which made the valley a perfect oasis to inhabit.

It is believed that the Mochicas were the first to build paved roads. As other Indian cultures, their temples were shaped as pyramids. The most famous and controversial are two pyramids located near the town of Trujillo. Both of them are devoted to the heavenly bodies, one is "Huaca del Sol", built to honor the sun, the other - "Huaca de la Luna", to honor the moon.  The Sun pyramid was partially destroyed and looted by Spanish in the 17th century, while the Moon pyramid remained in good shape.

Huaca del Sol is a seven tiered pyramid, the largest in Peru, 41  meters tall and 230 meters long.  The Moon pyramid is slightly smaller in size, as it should be, although its size doesn't diminish its grandeur and beauty in any way. Both pyramids were built out of adobe bricks, without any material to hold the stones together. Experts estimate that approximately 130 million bricks were used to build Huaca del Sol.  It is believed that Huaca del Sol may  have served for administrative and residential functions, while Huaca de la Luna served as a ceremonial and sacrificial place.

The murals of both pyramids are considered the most elaborate and complex in the world. They are covered with depictions of interesting mythical and historical characters, objects and personalities from Mochica civilization. For example, Huaca del Sol has a painting of a great mystical snail, which is believed to induce hallucinations if you stare at it long enough. The snail then becomes bigger and bigger , grows a tail, clawed paws and a long tongue, turning into a giant demon. This unique painting is slightly less than two thousand years, however, it still puzzles modern scholars. Snail motifs are quite prominent in Mochica culture, and it has been speculated to be a symbol of a mescaline-soaked snail, which was used during ceremonial taking of San Pedro cactus.

Huaca de la Luna has images of the god Ai apaec, the decapitator, who holds two-headed serpents, and paintings of warriors bringing naked and tied prisoners for sacrifice.  Archaeologist excavated a large number of remains, which further served as evidence that Huaca de la Luna was one of the main sacrificial locations. Ceramics, found at the site, are decorated in a similar fashion and symbolize figures of prisoners, to replace them after their death.

Many of the items found during excavations are on display in the nearby Moche pyramids museum.

Read more about Peru off the beaten path