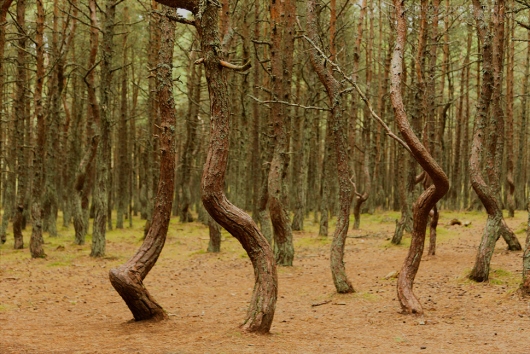 The Dancing Forest is located In the Kaliningrad region, in Curonian Spit national park. The park has coniferous  and deciduous trees, giant trees and just plain shrubbery – the variety of trees and bushes is quite interesting, with some of the specimens being quite ancient. However, the main, and yet unresolved puzzle of the park is the unique and anomalous Dancing Forest area.

The abnormal dancing trees occupy an area of approximately one square kilometer. The trees are pines,  planted in the 1980s. The tree trunks are intricately bent and some of them are even twisted in the shape of a loop. So far, there has been no logical explanation as to why the trees look so strange, since the rest of the trees in the vicinity look perfectly normal.

The ancient Prussians believed that trees with twisted trunks were gateways to the spirit world, and if anyone wanted to get rid of diseases, regain health, or even acquire supernatural powers, he would have to pass through the loop of the trunk. Another legend says that if one walks through a pine tree loop against the flow of time ( that would be from west to east), he would gain an additional year of life.

Many scientists, and, of course, psychics,  tried to understand the phenomenon of the Dancing Forest. One of the psychics immediately claimed that there is something wrong with the energy – it is way too powerful and one can come to this place to recharge. Some mushroom gatherers are superstitious of the place and try to avoid it, claiming that they see visions of dark forces. They believe that long ago, some witches gathered here for a sabbath, and while they were dancing by the fire, they were turned into twisted trees to stay there for eternity, by god's will.

The employees of the National Park choose not to be superstitious and believe that the answer to this phenomenon is strong geomagnetic fields.  There are several hypotheses according to the scientists – the environmental factors, genetic  features of the trees, virus or pest influence.

In 2006, several new trees  were planted here – some trees came from the seeds of the straight pines, and some from the twisted ones. The goal of this experiment is to see if all the tree grow to be twisted. The observations in 2014 showed that the trees grow unnaturally slow, as if something prevents the normal growth process, however, so far they have been growing straight.