The forbidden Kingdom of Lo, Mustang 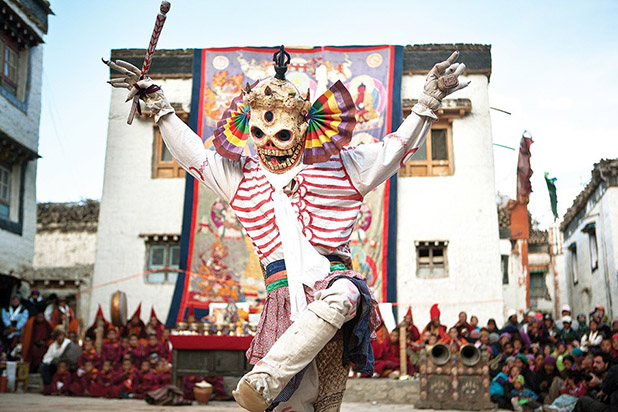 Upper Mustang, Nepal is one of those remote corners of the Earth where ancient heritage, unique culture, ethnic identity and eternal spirit have not yet gotten tainted by modernization and globalization. The place became open for outsiders only in 1992.  Formerly called the Kingdom of Lo, this area has experienced many upheavals through the ages, but managed to preserve their ancient Bön religion,  belief in demons and higher forces, monasteries dating back hundreds of years and places of power associated with Guru Rinpoche.  Locals call themselves Lo Pa, the inhabitants of the land “barren as a dead fallow deer”, who find joy in each passing day.

The former kingdom of Lo is culturally and historically linked to Tibet, but is politically part of Nepal. Most Lo Pa people still believe that the world is flat, that diseases are caused by evil spirits and can be cured through exorcisms. One of the most unusual traditions of Mustang is polyandry amongst brothers - a woman can be married to several brothers at the same time. Since the fertile land is very scarce, each brother marrying a different woman would bring about the division of land, making the family poor.

Bön  festivals, prayers and religious activities are an integral part of their lives. Many houses in the area are surrounded by shamanic attributes and symbols, like yak horns, dead rabbits, human skulls ant the like. Tiji festival in Mustang is a colorful three-day ritual known as "the chasing of the Demons", centered around the local myth. The myth tells of a deity named Dorje Jono who had to battle his demon father in order to save the Kingdom of Lo from destruction.

Lo Manthang, the ancient capital,is considered one of the most unique settlements by UNESCO.  The city is surrounded by clay walls, has a palace, 30 dwellings and unique Bön stupas, which are circumnavigated anti-clockwise. The city's gates still get locked every night.

The cliffs of Kali Ghandaki river gorge – the  deepest river gorge in the world on the way to Mustang have more than 10,000 human-built caves at the height of 20 to 50 meters, looking like beehives. In the mid-90s, archaeologists explored the caves and found several dozen 2,000 year old bodies, the remains of which are kept in the Mustang Eco museum. Since 1000 BC, the caves were used as burial chambers, meditation cells and living quarters. In 2007, a shepherd discovered a collection of 55 cave paintings depicting the life of Buddha. Other caves in the area revealed ancient Tibetan manuscripts, leading to a speculation that the caves might have been a teaching retreat for monks. Who built those caves remains unknown. In general, Mustang area is one of the least explored ones, full of numerous hidden treasures to be discovered.

One of the  first foreigners to visit Upper Mustang was Michel Peissel, a French anthropologist, who took a long and arduous journey to the place in 1964, while it was still a kingdom. He described his adventures in his book, Mustang – A Lost Tibetan Kingdom, which is still on display in bookstores across Pokhara and Kathmandu. Nowadays, visiting the former kingdom is not as hard as it was for Peissel, provided that you get a special 10-day permit in the capital and that you really enjoy hiking. The easiest way is taking a 25-minute plane from Kathmandu to Pokhara, then from Pokhara to Jomsom, and then hiking for 2 days along the river Kali-Gandaki through Kagbeni, Tangbe, Chusang ad Tsele. On the morning of the third day of hiking you will find yourself at the passage to Samar, and then you will have to do 2.5 days of more hiking to Lo Manthang. There are several agencies offering Upper Mustang treks.