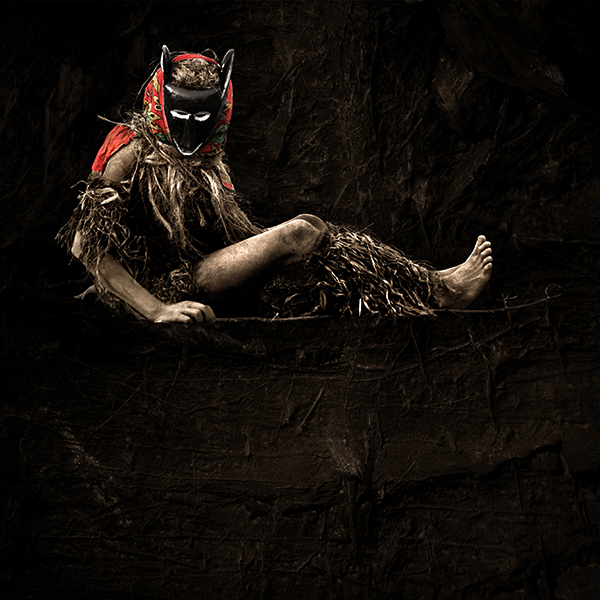 They hide in cemeteries. They wear scary masks and weird clothes. When darkness falls, they come out of the bushes looking like wild animals. When someone dies, they dance. The locals of Malawi villages know who Nyau are, but are not very willing to tell.

It is not known when and where from Nyau came, but were already present in South East Africa a thousand years ago – on the territory of the present Mozambique, Malawi, Zimbabwe and Zambia. Christian missionaries were not able to find the origins and the nature of this cult, spread among the Chewa people, because divulging secrets of their brotherhood is always punished very harshly, sometimes by death. Each village has its own Nyau group, which is a part of a large network. The word “Nyau” denotes both the community and its members, and the whole system of religious beliefs and rituals, including dances and masks.

Chewa people believe in god Chautu, who created all living things, and once lived on earth  together with people and animals. When men discovered fire, Chauta got angry and went to heaven, leaving the people to their fate. Chewa also believe that the spirits of their ancestors are always around and have to be constantly pleased. If the spirits of the ancestors are satisfied, they put in a word for the living to Chaute, so that he remembers to send them rain, harvest and fertility. Nyaus are the ones who can be mediums between the world of living and the world of the dead, and they do it with the help of the Great Dance – Gule Wamkulu.

The Great dance, or  the Great Prayer, is performed during funerals of important representatives of the community, at the initiation of the new members of the brotherhood, after the harvest and before the rainy season. Gule Wamkulu – is the name under which this secret cult and the Nyau ceremony were included in the List of Intangible Cultural Heritage by UNESCO in 2008. Besides the Great dance, there are “regular” dances performed by Nyau on weekends throughout the year in a village square.

At the Nyau adult initiation ceremony, the village women sing “Mother, do not cry for your son, because he will never be the same again. Your son has grown up and is now following the path of the great fathers.”  The dancers, wearing wooden masks, colored rags and burlap, dance to the beat of the drums rotating in opposite directions, making complex pirouettes, throwing dust into the air and making animal sounds.

Each Nyau has his own appearance. There is a variety of masks, each one with its own name and meaning. Besides the costumes representing ancestral spirits - good and bad - masks and costumes can represent different types of human passions and infirmities: vanity, infertility, epilepsy, stupidity, greed, lust ,etc.  According to Chewa beliefs, a dying person is visited by one of these animals to take him to the valley of death. The wicker designs of the animals are worn by Nyau dancers, depicting the animal spirits. The straw animals are made in a secret place, somewhere in the bush under a large tree, often at the cemetery. Outsiders can not see the process of creating the animals and can not know how they are operated during Gule Wamkulu. That's why these animals appear on the road only in the dark.

The Great dance usually lasts for three nights, and during the day Nyau can roam the countryside, scaring the locals. Sometimes the terrible forest creatures play and sing with the village children  - it all depends on what type of spirit or what character they portray. Some Nyau may be quite aggressive, in order to convey the wrath of insufficiently honored ancestors to the villagers, or to depict evil spirits and spirits of wild animals. Therefore Chewa boys are afraid to walk on forest roads. Any commoner, regardless of age can be at risk of being beaten if he stumbles upon an evil creature in the mask. Even some older people and the mothers of the children are frightened of Nyau – when a Nyau performer acts threatening during the dance, they rush into their houses to hide.

The most terrible of all Nyau is Gule Gwampini, because he is able to kill. When a Nyau wears the spirit apparel, his behaviour is guided by zilombo – the beast, and the person can not be blamed for his actions. The police doesn't do anything if Nyau kills a person – if an elephant or a lion kills someone, you can not put them in jail. Besides that, no one knows who the Nyau is – it could be your son, or your brother, or the policeman himself. Nyaus lead secret double lives and have a coded language, riddles, metaphors, myths and singing. Identifying a man behind the mask is disrespectful to the religion. Moreover, if it rains after someone was murdered by a Nyau, this means that he committed a good deed by killing a bad person, and the rain is there to prove it.

Ritual murder is now practiced less and happens only in the most remote communities. But you can still meet a Nyau among police officers and teachers. During business hours, they serve the state, and on weekends they become wild beasts and spend all night dancing, to relieve the stress of a hard week, raising clouds of dust to the sky and appealing to the ancestors and to God Chaute, so that he becomes merciful and returns to earth or sends some rain.

Gallery: The Great Dance of Nyau

Read more about Malawi off the beaten path