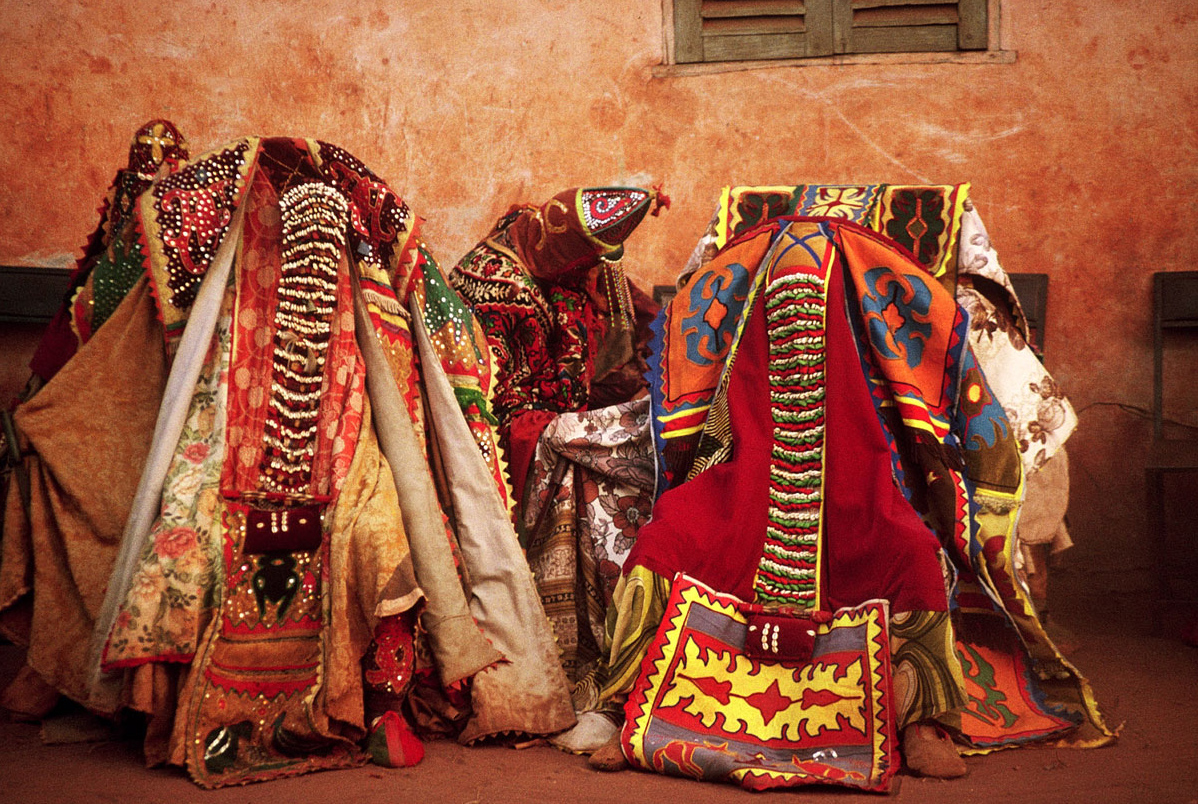 Since 1997, when the government of Benin declared voodoo an official religion of the country, thousands of voodoo practitioners started flocking to Ouidah, the historic center of voodoo worship, to get blessed by the main voodoo chief, Daagbo Hounon II, and to participate in the main voodoo festival. The supreme voodoo chief's reign dates back to 1400s, and you can see him in Ouidah in his SUV.

The Voodoo Festival takes place every January by the beach and lasts for a week. It starts with the supreme voodoo priest ceremony and sacrificing a goat to appease the python spirit Dangbe, who has his own temple housing over 400 royal pythons, which often escape and slither around the town. Then festivities proceed with chanting, dancing, beating of drums, self-mutilation, more animal sacrifices, horse racing and drinking fiery moonshine. Priests shower blessings onto gin drinkers and dancers, Zangbetos (the human haystacks), the voodoo guardians of the night ,spin hypnotically. Zangbetos are highly revered and act as an unofficial police force to detect thieves and witches and to present them to the community to punish.  Chicken sacrifice in primal style is one of the important activities of the celebration as well. Priests rip out throats of the chickens with their teeth and merrily drink their blood among the wooden phallus waving crowd. Lots of blood is poured onto the ground as offerings to the spirits.

The festival features various Egungun from across Benin, Togo, and Nigeria – those who are possessed by the spirits of dead ancestors. They move about the narrow streets in colorful voodoo attire, making high-pitched squeaky sounds. While the drums are beating and topless ladies are whirling in a state of trance, secluded courtyards of Ouidah's voodoo priests draw people in to discover secret ceremonies in their hidden temples. Should you decide to see a secret voodoo ceremony, it will cost you a lot of money, but you will definitely have a memory of your life.

To honor the slaves who were taken from the area and sent to America and the Caribbean, the festival marchers reenact the walk of pain – the 3-kilometre trek from the center of Ouidah to the harbor, stopping to pray at pilgrimage points. The most curious pilgrimage stop is the Tree of Forgetfulness. Back in the day, slaves would circle the tree nine times, believing that the tree will make them forget their identity. At the end of the slave trail there is the Gate of No Return memorial, with a mural depicting slaves walking out into the sea.

During the Cold War, a Marxist dictator Mathieu Kerekou tried to ban voodoo practices in Benin, but the parliament rejected the ban. Stories tell that he was so angry about being kicked out of his presidential position that he put a Voodoo curse on the parliament himself. Regardless of any dictators, voodoo thrives in this country and attracts many travelers around the world.