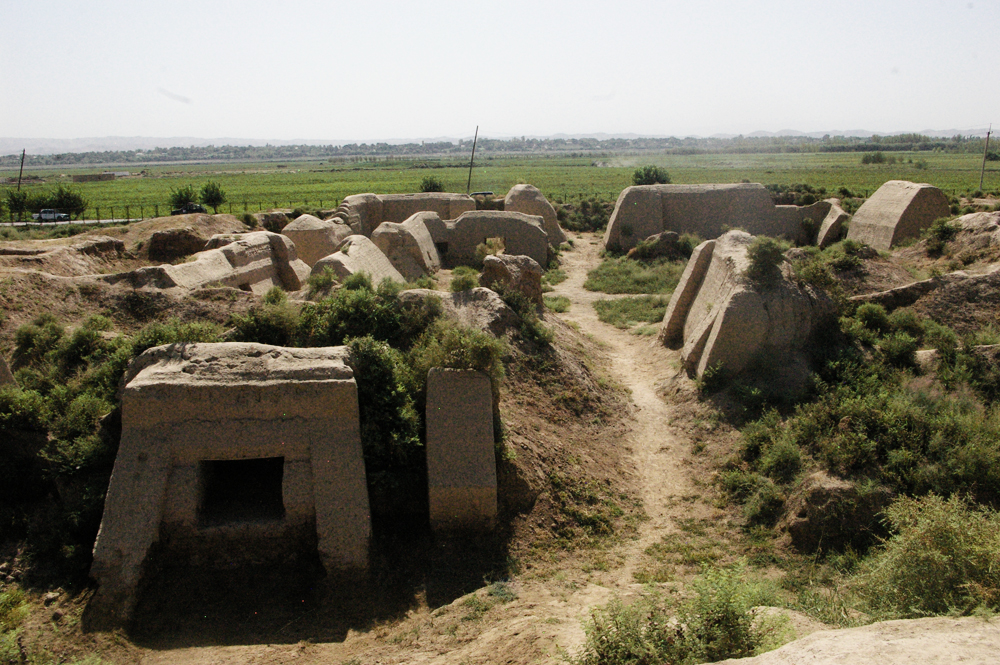 The Buddhistic cloister of Ajina-Tepa is situated at a distance of 12 km east from the city of Kurgan-Tiube, Tajikistan. According to archeologists, the cloister was built in the VII-VIII centuries. Ajina-Tepa was a name given by the locals to the hill under which the ruins of the cloister lay hidden. The name translates from Tajik as "Devil's Hill", as it is believed that the place is the abode of evil spirits.

The excavations of the hill were started in 1959 by the Soviet archaeologists. The cloister had two-meter thick walls, built out of massive blocks of adobe, and consisted of two rectangular courtyards, surrounded by stupas, corridors and cells. More than 600 works of art, found during the 15 years of excavation, tell us how rich the original decoration of the temple used to be. The walls and the vaults of its premises were covered by paintings and there were various clay sculptures on pedestals and in niches.  The main finding was a statue of a 12 meter tall reclining Buddha sculpture, known as "The Buddha in Nirvana". It is considered one of the most prominent Buddhist relics in the world culture, which combines Indian and Tocharistan decorative elements. The sleeping giant was divided into 44 parts and transported to Dushanbe to be restored in the Institute of History, Archaeology and Ethnography of the Academy of Sciences of Tajikistan. Today you can see it in the National Museum of Antiquities.

Ajina-Tepa excavations made archaeologists rethink the history for this part of Asia. Discovering this cloister presented the history of the Vahsh valley as a part of an ancient country called Bactria, and later Tocharistan. Bactria was the birthplace of Zoroastrianism, and later hosted Buddhism. Based on the recovered objects from the area, it is speculated that Buddhism was brought to China via this Central Asian territory.

There are numerous written sources about the influence of Tibetan Buddhism on Central Asia in the early Middle Ages. Scientists attribute this phenomenon to the Great Silk Road from India to China passing through these lands. Currently, the remains of the cloister are included in the UNESCO World Heritage List.

Read more about Tajikistan off the beaten path

Find more off the beaten path near: Dushanbe Rushon