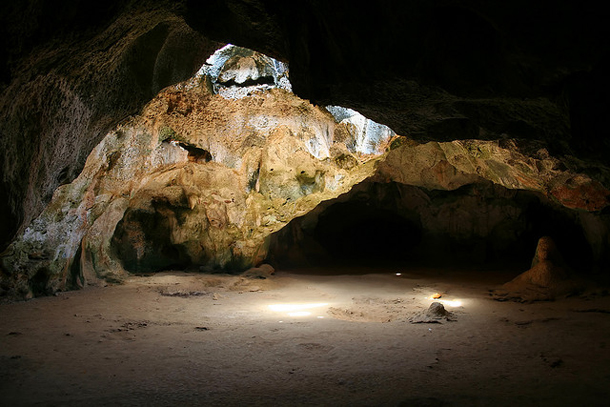 Huliba cave, or Baranca Sunu cave, nicknamed the Tunnel of Love, is a part of the cave complex located in Arikok National Park, which constitutes 20% of the island. The cave's corridor is 90 meters long, and the shape of it resembles a heart.

The legend behind the Tunnel of Love says that in the ancient times, a chief's daughter used to have secret rendezvous with her lover  in this cave, against her father's will. When the chief found out about his daughter's audacity to go against his will, he got enraged, followed them to the cave and took their lives. As the lover's spirits were leaving their bodies, they caused the ceiling of the cave to collapse and form a heart shape.

Locals also say that pirates used to live and hide their treasure in the cave, as this part of the island was the favorite location of the pirates. It is possible that the treasure is still there.

The cave has five entrances, which are steep, narrow and require crouching and crawling to get through. It is recommended to bring flashlights to explore Huliba – it is completely dark and you do want to see the pretty stalagmites and stalactites in the limestone rocks. The Tunnel of Love is populated by Long-nosed bats and Long-tongued Fruit bats, who are interesting to watch at night, when they fly out in hordes to search for food. One of the cave's chambers also has the Virgin Mary carved into the rock. It is recommended to visit the cave early in the morning or late in the afternoon, because the cave is very hat and has no air.

Gallery: Huliba - the Tunnel of Love cave in Aruba

Read more about Aruba off the beaten path

Find more off the beaten path near: Santa Cruz