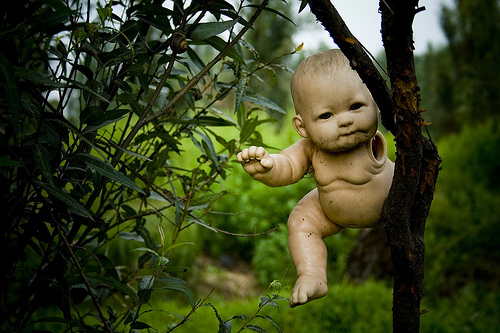 One of the famous places of tourist pilgrimage in Mexico is a small island, La Isla de las Muñecas, located in a vast network of canals south of Mexico City. The name translates from Spanish as "The Island of the Dolls."

For those who haven't heard of this place and hope to see an island full of cute toys and dolls, the island will look nothing they expected. La Isla de las Muñecas is full of dirty, ugly, and crippled dolls hanging from the trees. There are no less than 1,000 dolls, renounced by their owners, which can give the creeps to the most fearless visitors of the island.

It is believed that in the 50s of the last century, the hermit Julian Santana Barrera, renounced the world and family in favor of the island, began collecting dolls from wastebaskets and hanging them on the trees. Initially, the aim of the hermit was to soothe the restless soul of a girl who drowned nearby, and then he decided to pay homage to all the girls and women who have died in the waters of the Xochimilco canals. In the end, Barrera managed to turn this wonderful island into an eerie grim place, where your every move is watched by the hollow eyes of the decrepit toys.

Local residents added to this creepy collection – they would exchange their old dolls for vegetables that were grown by the hermit on the island. Julian the hermit died by drowning in the canal as well, on the 17th of April 2001, and now, his family looks after this weird open-air museum with the help of visitors' donations. The island has neither electricity nor any means of communication, and the  only way to get there is by boat.

According to the local superstitions, each of the dolls has some kind of an astral connection with the ones who drowned in the canal, and that during twilight these dolls can hypnotize lone tourists and entice them to enter the underwater kingdom. To avoid the sorcery of evil dolls, one should light a candle in front of the doll that looks the most suspicious and say a prayer for the repose of the soul it is connected to.

Read more about Mexico off the beaten path