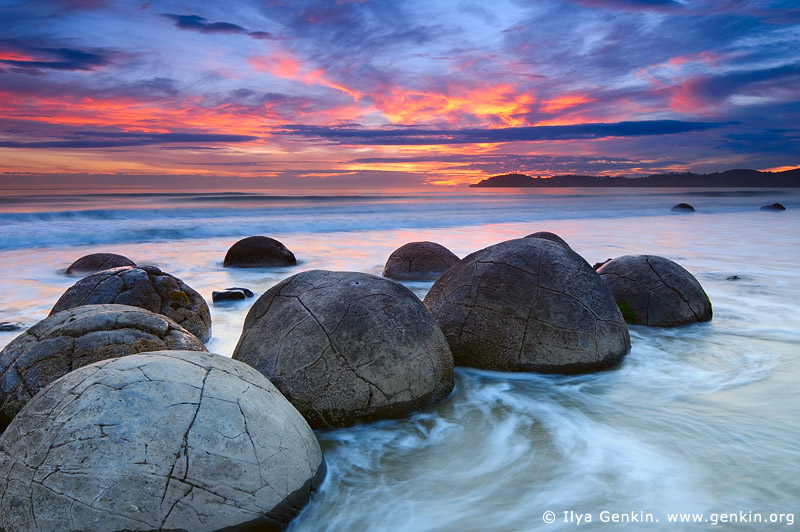 Moeraki Boulders in New Zealand are huge spherical stones with a diameter up to 2 m, scattered along the coast of Otago, near the fishing village of Moeraki, after which they are named.

There are many theories about the origin of such unusual stones. For example, Maori, the indigenous people of New Zealand, believe that these stones are magical kumara potatoes and calabashes, which fell out of a mythical canoe Arai-te-uru. Some think that these boulders are fossilized dinosaur eggs,  and others see them as remains of an alien aircraft, alien eggs or Great Balls of Fire.

Science considers these stones geodes - classic geological formations, which appeared at the bottom of the ocean millions of years ago. The largest boulders grew over 4-5.5 million years due to marine mud accumulation, the process similar to forming a pearl inside an oyster.  However, why these boulders are laying in this particular place, why some of them have smooth surface and others – porous, remains a mystery. One of the explanations is that 65 million years ago powerful lightning arcs broke off pieces of the cliff above the beach and crush them into spherical shapes. Whatever it may be, this natural wonder made Moeraki village quite popular. Thousands of travelers, photographers and adventurers come here seeking to touch the ancient heritage of Mother Earth.

Besides the amazing beach view with the mysterious rocks, there is a cafe and a gift shop with local arts and crafts.

Read more about New Zealand off the beaten path

The scariest rock of Norway