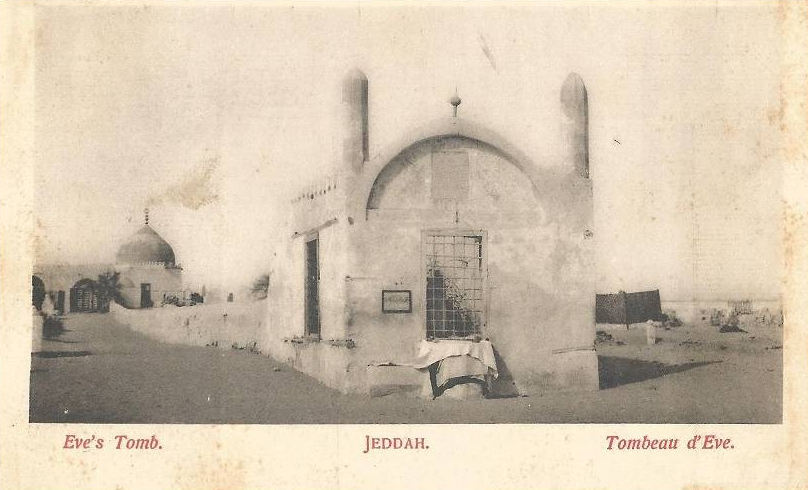 According to Islamic stories it so happened that when Adam and Eve got expelled from paradise, Eve ended up in Jeddah, Saudi Arabia, and Adam in Sri Lanka.  So, in Jeddah you can find Eve's tomb, which is located in the middle of one of the city's oldest cemeteries in Al Balad neighborhood.

Arab and Western historians from the late 19th century described the grave outside the city Jeddah as the tomb of Eve.  The tomb was more than 400 feet long, and the width was just 11 feet, which might have made one speculate about how strange the body of the mother-progenitor could have been. However, the size of the burial place of Eve did not bother the pilgrims who came to worship the first woman in the world and see her place of burial.

Nowadays, the grave itself no longer exists. Supposedly, it got destroyed in 1928 and the ground around it was sealed in concrete in 1975 to prevent the pilgrims from praying there. This cemetery is just rows of unmarked tombs – Wahhabists, a radical branch of Islam, forbid writing of names on the graves. There is just a small sign on the gates of the cemetery, saying "Our mother Eve".

Despite the lack of archaeological evidence of the authenticity of the grave, the legend continues. For some, the name of the city itself is a confirmation of the legend – Jeddah means "grandmother" in Arabic, thus alluding to Eve. Jeddah, the port city on the Red Sea, is considered the most feminine city in the world because it holds the tomb of Eve.

Gallery: The tomb of Eve in Jeddah

Read more about Saudi Arabia off the beaten path