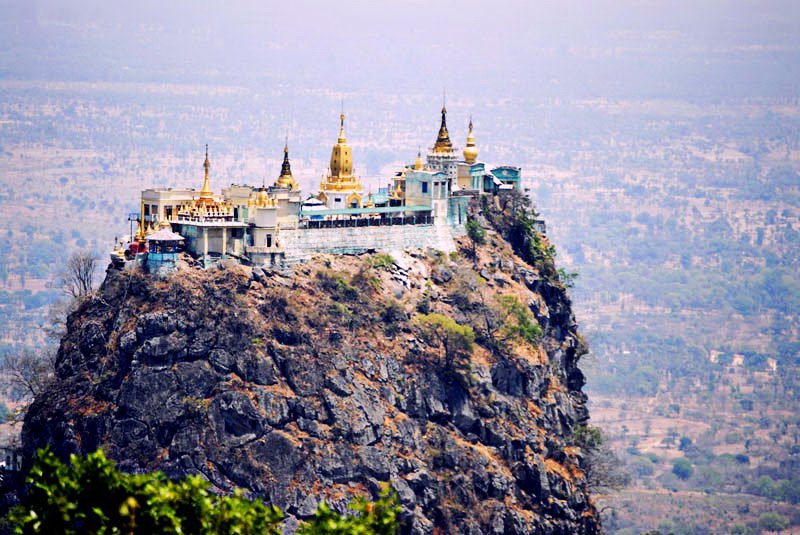 Taung Kalat monastery in Burma is more than an impressive place. Like a skyscraper created by nature, topped with the shiny golden peaks of the monastery, it rises 737 meters above the sea and the city of tiny shacks, standing on a volcanic plug, created by the nearby volcano Mount Popa. It is the abode of hermit monks and spirits called Nats, which is guarded by a multitude of monkeys. Occasionally, one can see a slow-moving non-ordained hermit monks called Yetis performing their meditative ritual on the mountain.

It is easy to get to Mount Popa from Bagan, but to make it to the very top for a fantastic view and to enjoy being pestered by monkeys, meeting monks, and disturbing the spirits on the way, you must prepare to feel the burn. Climbing 777 steps to the monastery while being threatened by monkeys to take away whatever belongings you might reluctantly decide to bring up with you is no monkey business! There are, however, shrines and temples along the way, where you can take a breather. Certain rules apply to the climbers as well: under any circumstances you are not to wear red, green or black clothing, or have any kind of meat – especially pork! – on you. After all, you do not want to anger the Nats, the monks and the already aggressive monkeys.

While ascending, you will see the statues impersonating the Nats - 37 spirits living together with the monks on the mountain. It is told that a long time ago, these Nats were humans who met violent deaths – the Green Deaths. When one suffers the Green Death, s(he) automatically becomes a saint. Nats are like humans, after all, they have been human before, so they can be angry, petty, and whatever is considered immoral from the Buddhist point of view. Every December, a festival is held in Taung Kalat to honor the Nats via dancing female or transgender shamans and celebratory activities. The worship of Nats comes from pre-buddhist times of animism in Burma.

You might be particularly lucky and run into a Yeti – not the abominable kind – the local hermit monk with a tall peaked hat, moving at a glacial pace and observing his surroundings, while paying a visit to the mountain.

Once you’ve managed to climb up the mountain, you will be exposed to an unforgettable view of the surrounding landscape, the city of Bagan and the majestic peak of Taung Ma-gyi, the Mother Hill, which is the actual Mount Popa. The mount with the monastery is just the volcanically produced appendage of the Mount.

Mount Popa and Taung Kalat attract many visitors. Besides tourists, this is one of the main Nat pilgrimage sites for the locals. Nowadays the location has received a title of nature reserve and national park. It is recommended to climb the mountain and spend a night there, to experience the majesty of it all during the sunrise.

March of the Lame Devils in La Vega