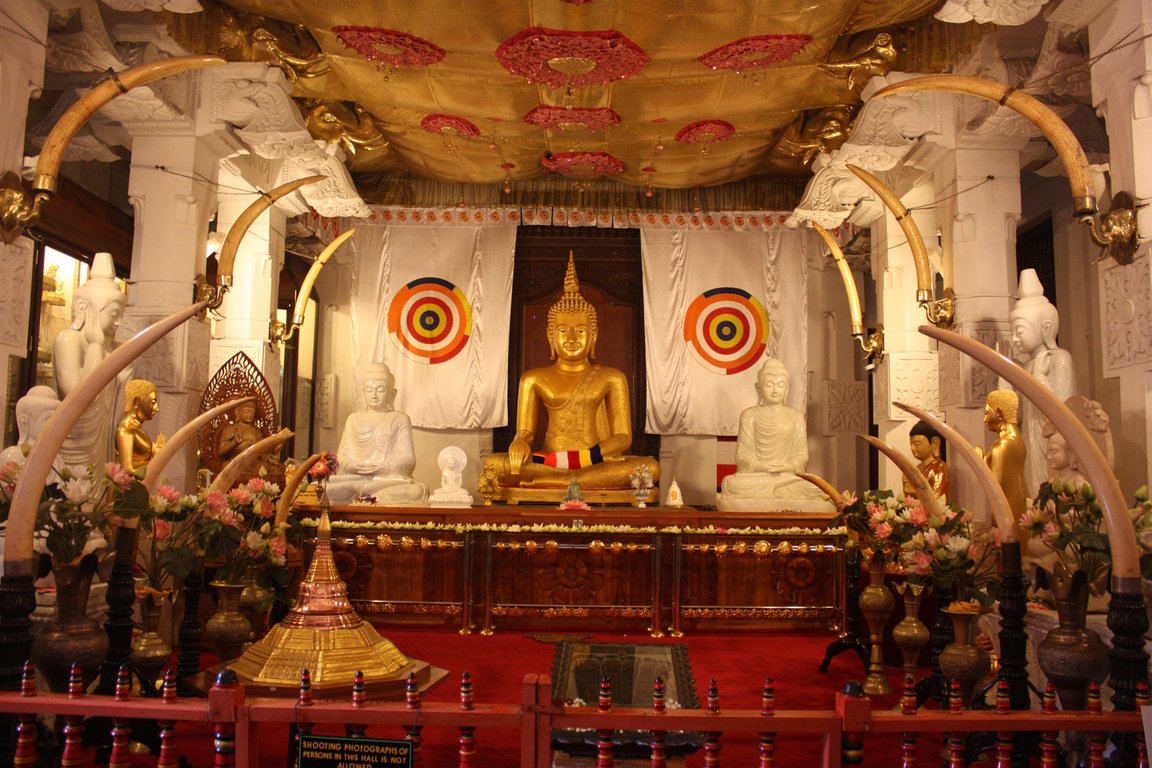 Kandy is a town in the center of Sri Lanka on the banks of the river Mahaweli among forest-covered hills.  The main attraction of Kandy is the Temple of the Tooth. According to Sri Lankan legends, when Buddha died in 543BC, his body was cremated, and one enlightened buddhist retrieved his left canine tooth from the funeral pyre. The tooth was given to King Brahmadatte for veneration, and became a symbol of the divine right to rule the land for the one who possesses it. Many wars were fought over this tooth, and it was passed from one king to another, until it ended up in Kandy, Sri Lanka.

The Tooth Relic was secretly brought to the temple in 371 AD from India by the royal children of the king of  Kalinga. The king feared for the safety of the Tooth in the midst of the turmoils going on in the area, and decided to give it to Sri Lankan Buddhists for safekeeping. While transferring the Tooth, princess Hemamali hid it in her hair ornament.

In Sri Lanka, the tooth was housed in different royal residences and temples, until it was transferred to the temple in Kandy, which was built between 1687-1707, and rebuilt several times. The temple complex of the Tooth, Sri Dalada Maligawa, does not have an impressive size, nor shape or decorum. It is surrounded by a moat, which probably served as a defensive measure to make sure that the relic was not stolen. The last attempt to steal it happened in 1998 by the hands of Tamil terrorists, who tried to blow up the temple.  Luckily, the tooth survived, although the temple got damaged.

Besides having a protective value, the moat serves as a design element, often encountered in Sri Lanka around the temples. Since lotus flower is a symbol of Buddha and is a water plant, the water around the temple symbolizes the domain of the lotus.

The new, restored temple has a series of paintings on its walls, depicting the story of acquiring the Tooth. The Tooth itself, according to the memoirs and chronicles, is 5.5 to 2.5 cm in size, stronger than a diamond and is unbreakable. The relic of the tooth is kept inside seven golden jewel caskets, placed into one another, which rest on a throne upon a golden lotus flower, in a shrine fronted by two large elephant tusks. Before the events in the 90s, the tooth used to be removed from the temple once a year, for a 10 day ritual procession, Esala Perahera. Now, only the jewel casket is being brought out as a symbol of the relic. The procession involves many fire dancers, drummers, about 100 decorated elephants and is a spectacle not to be missed.

The first royal elephant who paraded with the Tooth of Buddha on his back is also commemorated in the temple. When the elephant passed away, he was mummified, and you can see the elephant's mummy behind the glass in a special building, accompanied by the photos of the mummification procedure.

Gallery: The Temple of Buddha's Tooth in Kandy

Read more about Sri Lanka off the beaten path