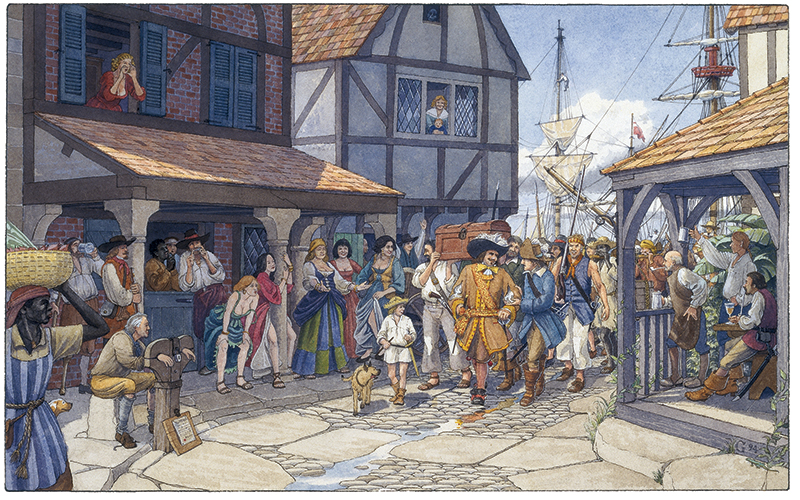 June 7th, 1692 was going as any ordinary day in a sunny city of Port Royal, Jamaica, when a terrible disaster happened – the Earth opened up and swallowed two thirds of the town, taking 2,000 people's lives. By sunset, more then 1800 houses sank into the Caribbean sea, and whatever remained was just a 10 acres of land.

Port Royal was once called the most wicked and sinful city in the world, famous for its Kill Devil Rum, pirates and prostitutes.  The city reached the peak of its fame in the 17th century, being the place where Henry Morgan, the famous pirate, planned his operations. Port Royal was the pirate Babylon, an ideal haven for pirate brotherhood ,with its beautiful harbor and a well fortified coast. In the face of competition between England and Spain, British authorities deliberately supported the marauders of Port Royal, whose targets were Spanish ships and cities. When Henry Morgan was appointed Governor, the city's everyday life got well adjusted to the character of its inhabitants – the citizens of Port Royal were considered most blasphemous and perverse. Even after Henry Morgan's death, when pirates were not as welcome in the city, many taverns were thriving by offering the best booze, loads of food and frivolous women.

A large part of the pirate booty would quickly end up in the hands of the unscrupulous city traders. Safes and warehouses were overflowing with golden and silver ingots, icons, jewelry and precious stones, luxurious silks and brocades,  waiting to be shipped off to England in exchange for money and different goods.

After the disaster, 13 acres of buildings sank to the bottom of the harbor, and another 13 acres were washed away by a tsunami. At least 50 ships and valuable items, including cargo fleet, which sank in 1691 and was ransacked by Port Royal's marauders, were lost. Most of the survivors stayed in Port Royal, some moved to the opposite side of the harbor and settled in Kingston, which was an unremarkable village at the time. Unfortunately, another catastrophe awaited the ones who stayed in Port Royal – the remains of the city were destroyed by the fire of 1703. A couple more hurricanes followed and covered the ruins with sand and seaweed.  Port Royal was no more.

Three centuries later, in 1953, a ship Sea Diver, built  by Edwin Link specifically for underwater archaeological research, sailed to Port Royal. The vessel took on board various findings raised from the seabed near the city, and the map of old Port Royal was created, based on the found old map from 1827. The expedition conducted a thorough survey of the seabed using a sonar.  After series of excavations, the findings were abundant – thousands of Spanish silver coins, golden jewelry, watches, Chinese porcelain statuettes, candlesticks, cutlery and hundreds of bottles. The most unique finding was a perfectly preserved brass clock with traces of leather covering, made in 1686 by Paul Blondel, Huguenot emigrant from Chalonsa. The time of the clock showed 17 minutes till noon, which was the exact time of the disaster.

Six years later, the streets of the sunken city were roamed again by the underwater archaeologists from Robert Marx team, funded by the Institute of Jamaica and the Commission of the National Fund. Their goal was to perfect the map of Port Royal.  Just like the previous expedition, the first thing to be found was a tavern with a lot of bottles, about 500 pipes and cutlery. Then two well-preserved houses were found, more jewels, coins, objects of art, and a 25-meter long Swan frigate.

All the excavations caused a big hype among the locals and mutual accusations of opposing political parties about trying to steal the treasure, which interfered with the excavations. The team was even threatened by the local mafia to share the treasure or else. Due to these disturbances, the Parliament raised the question of ceasing the work on the site. Excavations continued until 1968,  however, much more is left to be revealed about the sunken city. Experts say that Port Royal is one of the most important archaeological sites in the world and requires targeted work with the use of modern methods.  Excavations continued in 1981 and in 1992. Since 1999, the place has been a designated National Heritage site.

Today, most of the remains of the pirate city lie under 40 feet of water. If you want to dive in the Port Royal ruins area, you need a special access from the government, but you can also visit the National Museum of History and Ethnography dedicated to history of the pirate haven.

Read more about Jamaica off the beaten path